Best series I've seen in quite a while.  Visually it was pretty interesting, lots of experimental stuff.  But the dialog was the real star, witty both at the surface and in the subtext.

is the worst season for anime in recent memory.  Even The Melancholy of Haruhi Suzumiya was utterly ruined by the excrable Endless Eight episode.  The one bright spot is Bakemonogatari which is shaping up to be one of the best anime series in many seasons.

I've been wearing them for five days now and the manual-focussing thing has become pretty much second nature.  There are really only about four modes I need to worry about - driving (focusing tab all the way to the left), slouched down working on the desktop computer (tab about 1/3 over), sitting upright working on the laptop (tab in the middle), and reading a book (tab about 2/3ds over).  Sliding the tab all the way to the left gives me perfect focus at a distance of about 4", but I've never needed this.  The mechanism was a little stiff at first but smoothed out in about two days.

The biggest feature of these glasses, however, is the lack of nausea that I was getting with my progressives.

I've been having problems with nausea ever since I got my bifocals a year and a half ago.  I was about to break down and get four pairs of glasses (night driving, day driving, short-reading, and mid-range for programming) when I found out about a new company called Trufocals that makes adjustable-focus eyeglasses that use a fluid lens to control the focus.  The front element can be popped out so you can swap out tinted and untinted lenses.  Placed my order a few days ago for the specs and both types of front lenses, and just got an email from them that the glasses will be shipping next week.  Hopefully they'll work as well as they promise.

Post Ike Power came back on at about 4:30pm Saturday.  OTOH my phone and DSL was just restored.  Wierd.  Usually the phone system is much more robust than that.

Hurricane Ike Hwy 6 and Westheimer - Lots of wind but no real rain yet.

Update 9:18pm: Radar is showing 35mph winds here, 75mph wind is on the way - transformers are going...  Also the Chronicle reports that about 40% of the people on galveston are staying.  If that's true for the other low-lying areas as well then there may be nearly a half million people underwater in about 12 hrs, if the storm surge is as high as they're claiming (Cat4 or 5 level surge - 20+ ft, plus it's hitting at high tide).

Update 10:32pm: Still lots of wind, not much rain.  The eye is clearly visible on the local radar, and the eye is quite a bit larger diameter than beltway 8 (the outer of the two loops around Houston).  Gonna be an unpleasant 18 hrs.

Jeez the last two seasons of anime have really sucked... Last season there was Clannad, Spice and Wolf and the second season of Minami-ke and that was about it - True Tears and Shigofumi were both licensed early which was just as well since Shigofumi turned boring after the incredible two-episode opener, and Goshushuu-sama Ninomiya-kun never really went anywhere.  This season there's Kurenai, The Daughter of Twenty Faces, and a bunch of craptastic fanservice vehicles.  Next season we'll be getting another season of Hidamari Sketch which I'm looking forward to, but still no word on the long-anticipated second season of The Melancholy of Suzumiya Haruhi, and the fans are getting restless.

Ranma 1/2 Over at Chizumatic there's a running discussion of Ranma 1/2, particularly the old argument as to how much water it takes to change Ranma between girl and boy forms.  Personally, I'm of the opinion that it's whatever is necessary to be funny.  Anyway, here are three shots from the first episode of the first season, where we first see Ranma change form. 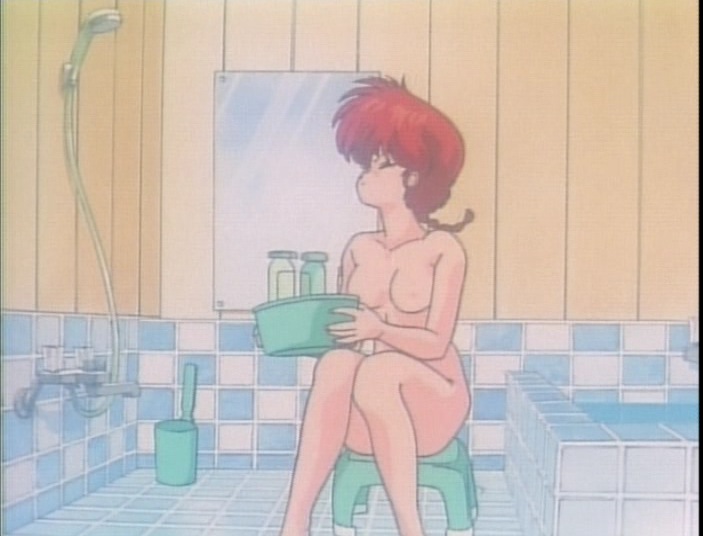 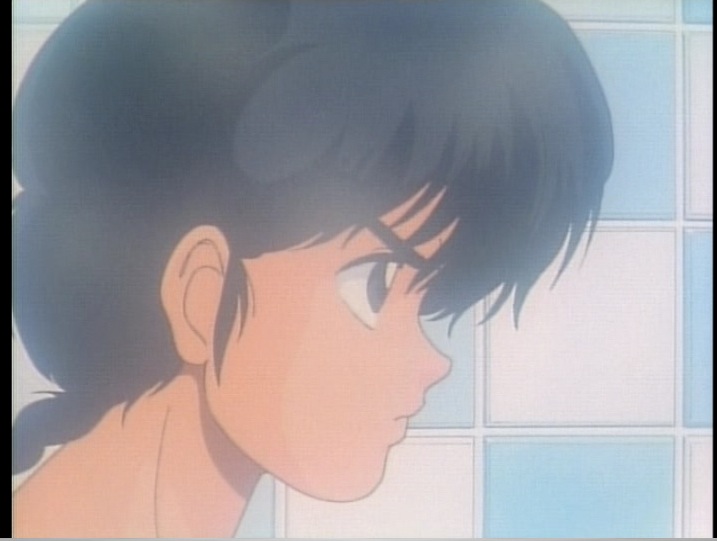 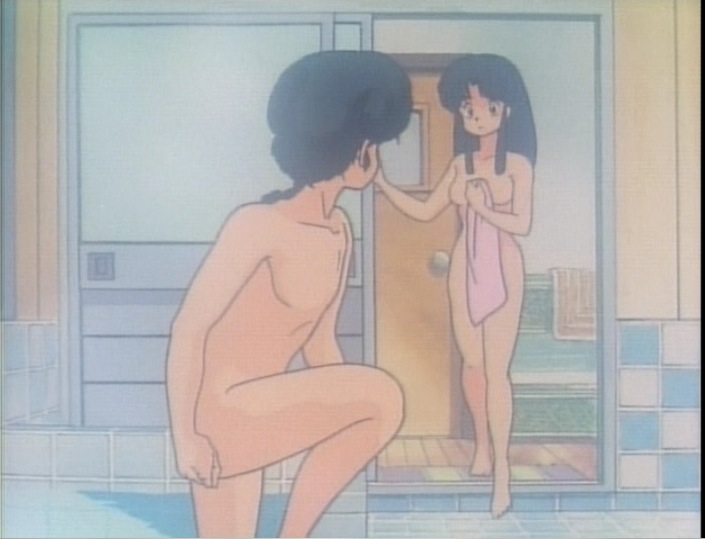 1 Who is that in the third picture? That's not Akane, is it? (Did she change her hair style?)

2 That is Akane.  More would be a spoiler.

3 I feel ashamed for ever having said anything complimentary about Goyshusho-sama Ninomiya-kun's fanservice level.

4 They should draw it more realistic by make the Ranma hair looks wet. From the pics, we cannot conclude that Ranma change form because of the water, since he is not wet at all, not his body nor his hair. How it could be? Just want to shout eeekkk when see them naked.

Kimikiss Pure Rouge (final) A bit disappointing at the end.  Yeah it was nice to see Mao and Kouichi get together, but it sucked the way it happened.  It's really a shame that Yumi didn't break it off with Kouichi first since she was the one moving away.  Ah well, at least Futami's shell finally cracked all the way through, and it appears that Sakino will do fine as well.

Five Centimeters Per Second This was directed by Shinkai Makoto, director of the acclaimed movie "The Place Promised in our Early Days".  The theme is time, distance, and growing apart.  It is haunting and profoundly sad - not weepy (though the last scene kind of knocks the stuffing out of you), just very melancholy and lonely.

Chapter one "Cherry Blossom" shows Tono Takaki as a middle schooler in love with classmate Sunohara Akari who winds up moving away with her parents, though they keep in touch with letters.  Then shortly before his parents move and take him even farther away from her, he manages to catch a train and spends the night with her huddled beneath a blanked under the snow.

Chapter two "Cosmonaut" shows him in high school, and a cute surfer-girl classmate of his named Sumita Kanae.  She is attracted to some unknown quality in him, and tries time and again to work up the courage to tell him she loves him.  Finally she realizes that this unknown quality in him is that he is always looking far into the distance, and with this comes the realization that he doesn't return her affection.  This chapter ends with her crying herself to sleep, and in a voiceover she mentions that she did this for a very long time.

Chapter three "5cm Per Second" shows him in Tokyo after college, working in a bleak job and living in a bleak apartment.  One day he passes adult Akari on the train tracks, and spins around to say something only to be blocked by a passing train.  A series of split-second images provides glimpses of the intervening years, showing how they gradually stopped writing each other, and showing Akari walking closely with another man, and preparing to get married, finding some of Takaki's old letters while packing to move, then finally as a happily married woman.  Interspersed with this are images showing just how dead inside Takaki has become, as well as flashes showing Kanae's life after Takaki graduated high school and left home.  The chapter ends as the train finally passes, and Takaki opens his mouth to call out to Akari, then realizes that he was the only one that stopped to talk.

Middle-school Akari reading one of Takaki's letters next to the cherry tree where she and Takaki would later share their first kiss: 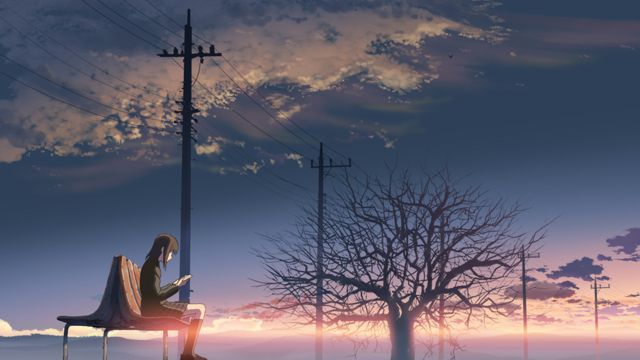 Takaki on the snowbound train on his way to see Akari: 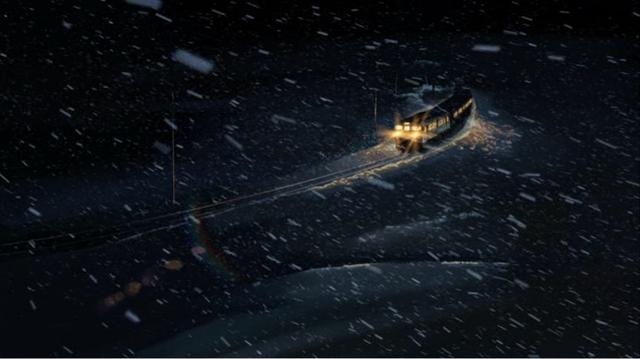 Akari waiting for Takaki at the station: 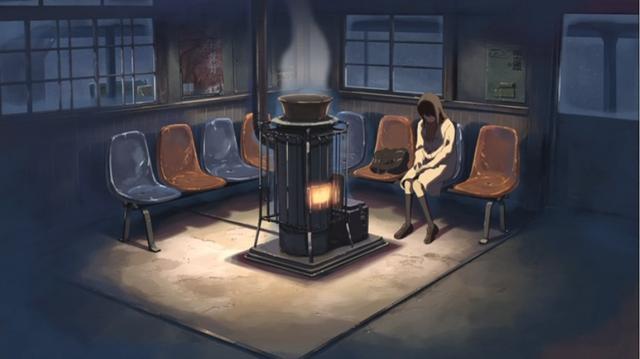 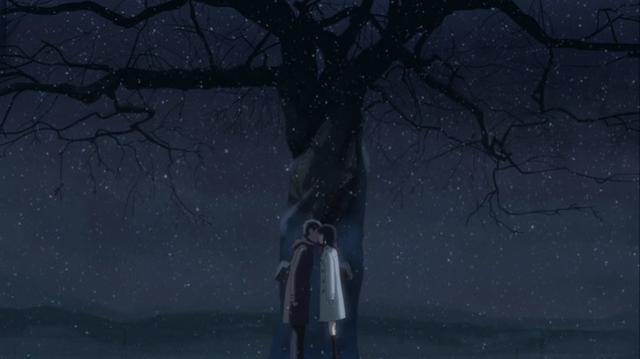 Kanae and Tono talking on their hillside: 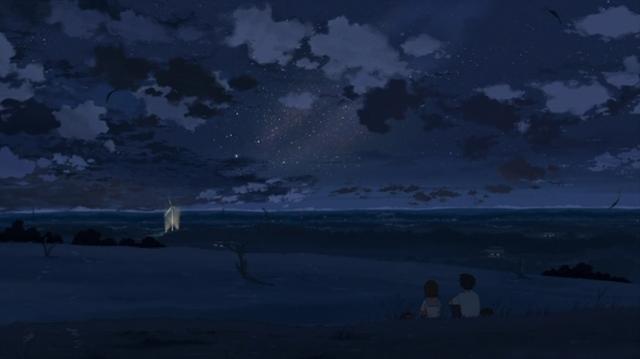 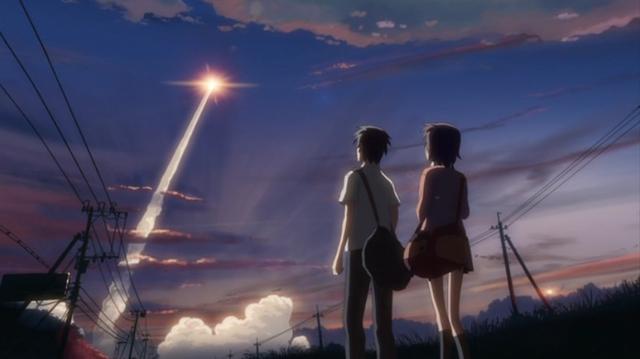 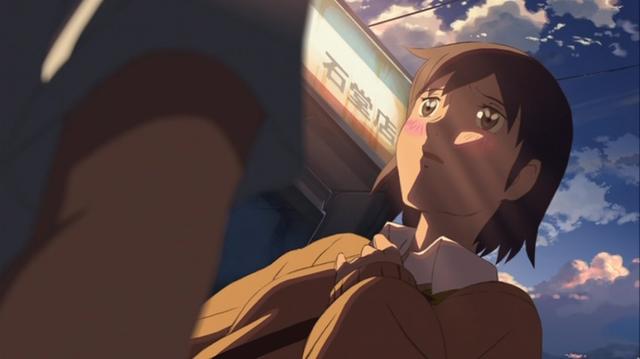 Confession that never will be: 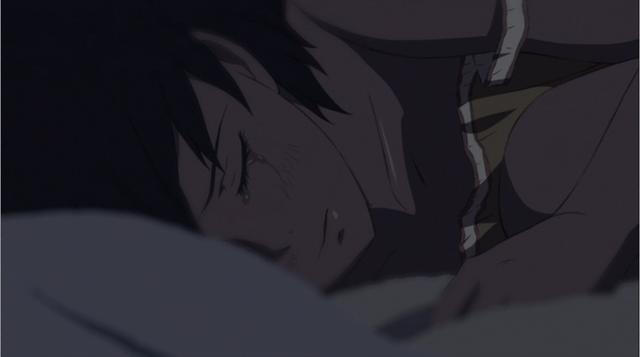 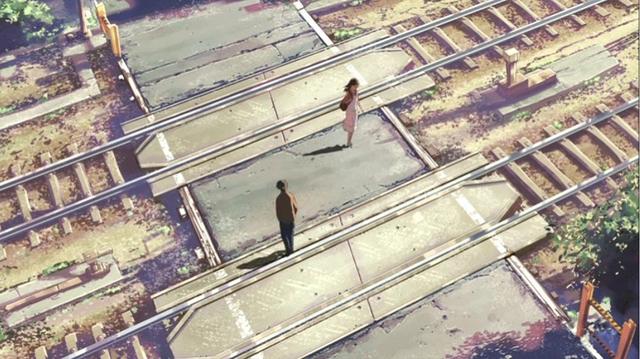 Kanae revisiting her and Takaki's hilltop: 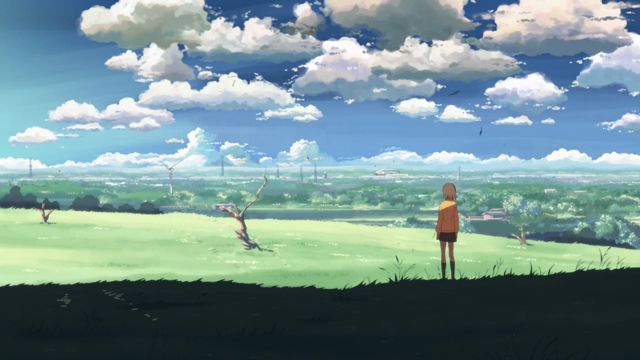